My Friday client called to say the painters are almost done, and I sussed it that it was better if I don’t come and stir up dust and leaves near the fresh, new, wet paint.  Mr A. has gone to a guy’s-party-induction-afternoon in the canyon.  I suppose it entails drinking expensive whiskey.  Very great! that he is spending quality time with his neighbors.  He has been doing a lot of work on the foundation of the building that will be his home, and someday, maybe, my studio, in a remote pocket of wilderness over the hill.

I decided to stay home and untie some of the knots that are keeping me in a state of confusion.  I repaired the extension cord to the hall closet and moved the clamp lamp, rearranging clothes onto one-rod-only, which has opened up a clear space in the back.  I have been very slowly sorting and rearranging things, which often results in an increased level of clutter for a good while.   I can never seem to find an optimum arrangement for paints and things. 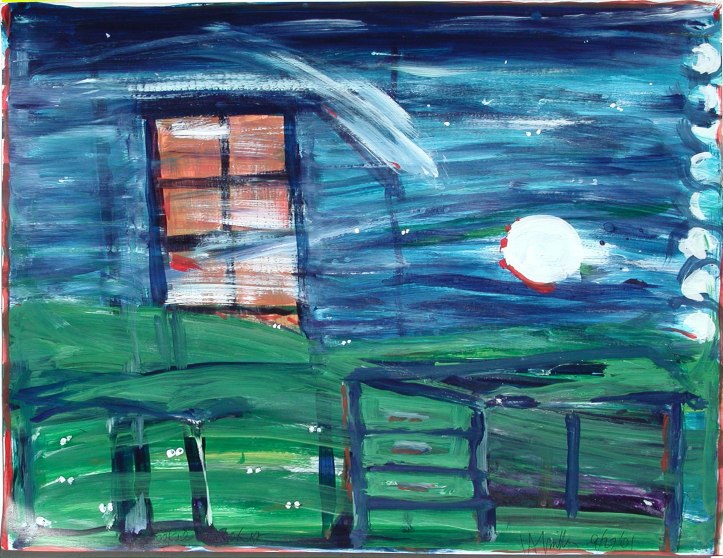 The proximity of urban neighbors impinges on my sense of free access to outbuildings and what I have in each of my many hidey-holes.  I wish for a better arrangement, although I know that nothing external will make a difference in my personal behaviour.  I like to be reclusive, secretive, I hide myself from myself.  There is an incredibly long arc of creative intent.  I repainted the red leg of my turquoise stool a lupine blue–very satisfying and calmer–but to do so I  opened up the cupboard where I keep tubes of paint in a suitcase, begatting  a wild reshuffling of magazines and calligraphy notebooks between armoire and book case.

I have many collected boxes for art supplies that often replicate each other.  Pens dry out, blades corrode from neglect.   There are five open receptacles on the round table now, none of which have a clear purpose, except to be lovely useful objects in their own right.  Last week after smoking some weed I found myself in the kitchen working over a sketchbook like in the old days when this was my studio and we cooked in the kitchen in Steve’s apartment next door.  I suddenly decided it would be perfect if I moved the calligraphy toolbox into the cupboard where the tool-toolbox was, but now that seems a futile exercise.  Have I DRAWN anything in ever so long?  I can’t despair, though.  I always make some headway, somehow.

This entry was posted on November 7, 2014 by batcactus. It was filed under Uncategorized .