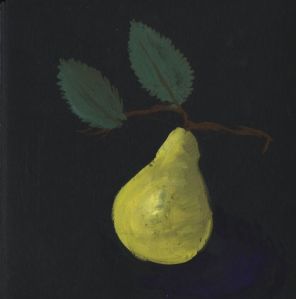 Cox’s Orange Pippin–one of a series of heritage applesIn 1993 I did a series of Prismacolor pencil illustrations for a rare fruit tree catalog while training in grafting and propagation at a Heritage Fruit nursery.  In partial payment I received several rare apple, pear, fig, and other trees.  A Warren Giant Pear I planted on the street gives 200 beautiful, grainless pears every year.   The catalog was never printed.  I also did a series of spinoffs–a paper mache pear, an apple core, and some studies.  This one, which I sold, is from a photocopy–Calville blanc d’Hiver..

While living in Arizona circa 1972-4 I had access to specimens of Lophophora Williamsii,  some of which still had viable had roots and were kept as pets.

This entry was posted on March 7, 2011 by batcactus. It was filed under Uncategorized .